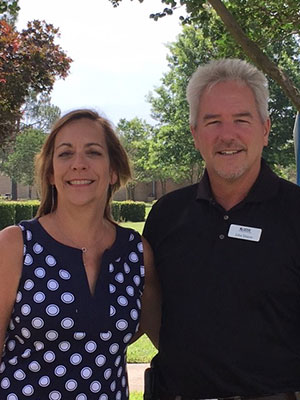 John and Barbara Mason are interwoven into the fabric of the Thomas Nelson family. John has been with the College since 1986. He immediately felt the College’s effect on students’ lives by volunteering at Commencement. He recalled, “I was amazed at the stories of students who had to overcome incredible obstacles to stay in school. It was then that the impact the College has on people’s lives became real.”

Barbara’s career at Thomas Nelson began in 2002 in the nursing department. She saw first-hand how so many of our students’ lives were transformed by their experience at the College. She noted, “many times students began the program with little confidence in their abilities, but they would get to a turning point, and their confidence blossomed.”

John recalled the early years of the employee giving campaign, an annual tradition where employees enroll in a payroll deduction program to support the College. He reminisced, “There was a partnership with the United Way. Every employee was strongly encouraged to give. Even if it was one dollar, our goal was 100% employee participation.” John was initially inspired to give to the Foundation after he heard a testimonial from Dr. Templin.

John remembered, “when he was a community college student his car broke down. He couldn’t afford to fix it. If he didn’t have a car, he wouldn’t be able to complete his education. His college’s foundation stepped in and provided him with the funds to repair his vehicle. Dr. Templin’s experience really showed me it’s the everyday occurrences that can disrupt a student’s education. But with even a small donation, we can help our students complete their journey.”

Barbara also recalled the many times nursing faculty would speak with students about their performance and would discover many didn’t purchase or rent textbooks because they had to make choices between caring for their families and purchasing textbooks. She believes, “when we give to the Foundation, we know that we’re giving to people who are really in need. It makes us feel good to know we’re really making a difference.”

The Masons are not only employees, but they are also Thomas Nelson alumni. Barbara received her degree in administrative support technology and is currently finishing her undergraduate degree in psychology from Saint Leo University.

John obtained his degree in business administration in 2004. He completed his undergraduate studies and MBA from Saint Leo University in 2012 and 2015 respectively.

Becoming a Thomas Nelson alumnus is a family tradition with the Masons. All three of their children have attended Thomas Nelson, and two are alumni.

Barbara proclaimed, “we have an extended family at Thomas Nelson. At this point in our lives, it’s about giving back and remembering where we came from.”