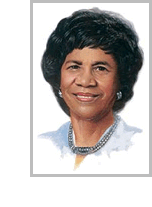 The auditorium was named in honor of Dr. Mary T. Christian, an educator, delegate and leader, who is a premier role model for our community. Born and raised in Hampton, Virginia, Dr. Christian was one of five children in a household where money was scarce but the value of education was instilled.

She began her academic career at Hampton Institute (now Hampton University), where she later returned as Director of the School of Education, rising to Dean of the School of Liberal Arts and Education before retiring as professor emeritus.

In 1985, Dr. Christian was the first African American and first female from Hampton to be elected to the state legislature, post Reconstruction. She went on to serve nine consecutive terms representing Virginia’s 92 House District.