In late 2019, as he was nearing retirement as the president of Thomas Nelson Community College, Dr. John Dever was reserved when discussing his legacy.

“It’s hard to say. I just believe so strongly in our mission,” he said. “I believe that this community and its residents, and so many individuals, from all circumstances and backgrounds, their lives have been transformed because we’re here.”

For Dr. Dever, who passed away April 15 at his home in Newport News at age 74, those weren’t just words. Upon his retirement, he established the “John and Peggy Dever Changing Lives Fund,” making a personal donation of $100,000.

“I wanted to make a contribution to the institution upon departing from it,” he explained. “I’ve spent a lot of my time asking others to contribute. I have contributed over the years myself, of course, but I wanted to use the occasion and I particularly wanted to honor my wife as well.” 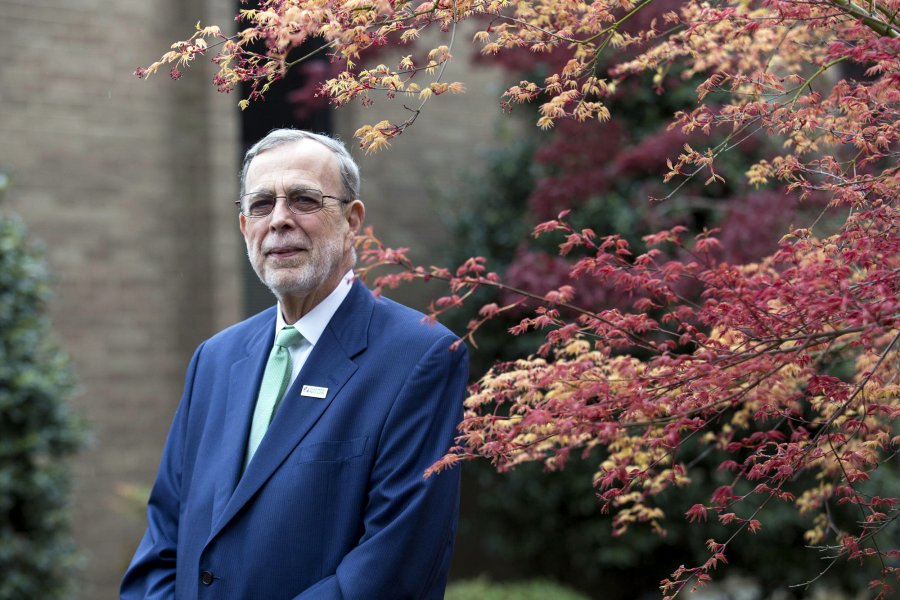 Dr. Dever was born Nov. 10, 1945, in Lebanon, Ky., the youngest of three boys. He graduated from St. Augustine High School before earning his bachelor’s degree in history from Bellarmine College in Louisville. After a few years as a high school teacher, he went to the University of Kentucky, where he earned a master’s in English. As he was finishing his degree, he accepted a job at Parkersburg Community College in West Virginia. He taught there for a year before joining Thomas Nelson’s English department in 1975. During his time at Thomas Nelson, Dr. Dever completed work for his Ph.D. in English from the University of Virginia.

In an article published by the College in late 2019, Dr. Dever said he thought he would become a professor at a four-year institution. However, his experience at Parkersburg Community College changed that, and he began a 45-year career at four Virginia community colleges.

“It got in my blood, frankly,” he said of the community college mission. “It wasn’t what my career path was.”

“John Dever was a true community lover,” Dr. DeCinque said. “Every time I heard him speak of Thomas Nelson, you could sense that community college students and their success was his true calling. His contributions to higher education, and especially Thomas Nelson Community College, were significant and many. He will be missed by his Thomas Nelson family.”

Michael Kuhns, chair of the Thomas Nelson College Board, agreed.

“The Thomas Nelson College Board is saddened at the passing of Dr. John Dever,” he said. “John served Thomas Nelson and the Virginia community college community with dedication and commitment for over 40 years, with many years as a professor at Thomas Nelson. During that time, he also taught significant numbers of students at the Newport News Shipbuilding Apprentice School. The board wishes to express its sympathy to Dr. Dever's family, friends and former colleagues. May he rest in peace.”

Glenn Dubois, the chancellor of the VCCS since 2001, had a long association with Dr. Dever.

“He was a loved colleague, well-known and respected throughout the VCCS,” Dubois said. “John loved his community college career. He will be missed.”

Beverly Phillips began a friendship with Dr. Dever in 1978, when she joined the math department at Thomas Nelson.

“He was such a warm, caring person,” she said.

A few years ago, Dr. Dever selected her to paint his presidential portrait.

“I was honored that he wanted me to paint his official portrait,” she said. “One of my favorite memories was when he visited my art studio in Poquoson. I needed to study his coloring and bone structure, and he graciously agreed to come. It was a special afternoon.

“So now I say goodbye to a dear friend. Some people are just too good for this earth,” she added.

While Dr. Dever’s original plan did not include community colleges, those who worked with and for Dever said the pairing couldn’t have worked out better.

Dr. Patrick Tompkins, the vice president of Academics, Workforce and Student Programs at Eastern Shore Community College, worked with him at Thomas Nelson and the two were longtime friends. When interviewed for a feature on Dr. Dever’s retirement, Tompkins said it was easy to convey his impact on others.

“I think if you knew John and worked with John, he touched you and he helped you become better as he was trying to become better himself,” Tompkins said. “His legacy is that great soul that touched so many people and in the process of bettering an institution, he bettered himself and bettered those around him. People like myself recognize how generous that was and we’re grateful for it. I think anybody who worked with him in that capacity would tell you that part of their success is because of John Dever.”

Tompkins added Dr. Dever was known as a caring, ethical person. He also was intelligent, insightful, and had a great sense of humor. Tompkins related a story of when he applied for the vice president position at Thomas Nelson, but did not get an interview.

“John, the gentleman that he is, invited me in to deliver that news to me personally,” said Tompkins, noting Dr. Dever did that for other candidates, as well.

“So he gave me the bad news, and I said to him, ‘Well that’s okay, John. My parents raised me. They believed in disappointment,’” Tompkins said. “And he laughed ... because John and I are both Catholic. We have this Catholic background, and he knew exactly what I was saying.”

Tompkins said the fact Dr. Dever made it a point to deliver the news to him directly spoke volumes about his character. Dr. Dever had delivered bad news before, and it’s not something he liked to do, but understood it was something he had to do.

Per Dr. Dever’s request, the “John and Peggy Dever Changing Lives Fund” is not an endowment, and won’t offer traditional scholarships. As a longtime supporter of the College’s ballroom dance club, the performing arts, Student Government Association, honor society, and many more student clubs and organizations (“I think those are very, very important,” he said.), the idea is to assist those activities as well as support students who have identified barriers or specific needs as they try to complete their education.

“What I’d like to leave, it’s just support for our students, both to meet their needs but also to help them grow and develop, and make the full use of their time here at the College,” he said.

Because of his words and deeds, it’s easy to see his legacy is the mark he leaves on the community college system he enthusiastically embraced for 45 years.

Dr. Dever’s wife, whom he met while teaching at Parkersburg, died in 2016. They were married for 39 years. He is survived by two children, Seth Dever and Sarah Sullivan, and seven grandchildren.

In lieu of flowers, the family asks that donations be sent to the “John and Peggy Dever Changing Lives Fund” at Thomas Nelson, the Food Pantry at Immaculate Conception Catholic Church, or a charity of your choice.

His family will have a private graveside service at Peninsula Memorial Park. A memorial service will be announced at a later date.