Dr. Kimberly Britt remembers being told, as a youth in foster care, that she was considered “at-risk.”

“I was kind of offended by that,” she told the room full of Great Expectations graduates, coaches, donors, and others.

She ticked off the things that she was considered “at-risk” of: failing out of school. Being incarcerated. Committing suicide.

“I was considered at risk of everything but anything good,” she said.

On May 17, Dr. Britt, now the vice president of academic and student affairs at Reynolds Community College, shared her story of growing up in foster care as the keynote speaker at a reception for students graduating as part of the Great Expectations program. An initiative of Virginia’s Community Colleges, Great Expectations (GE) is a nationally-recognized program that helps Virginia’s foster youth earn the postsecondary credentials they need to achieve an independent and successful life.

Dr. Britt (a former Thomas Nelson academic dean) went on to share her story of being a part of the foster care system, enduring abuse and neglect her entire childhood until she aged out of the program. The turning point, she recalled, was when she was offered a track and cross-country scholarship to attend college.

At first, she recalled how badly she struggled. She was lagging behind her teammates, until her teammates were so far ahead of her that she could barely see them. When her coach took her aside told her that she needed to step up her efforts in order to keep her scholarship, she became angry. She tearfully recounted all of her struggles, ending on her belief that she would never be as good as her teammates since they weren’t carrying the same trauma she was.

She expected sympathy, same as usual. Instead, his response was a challenge.

“He looked me dead in the face and said, ‘you’re right. They haven’t. They don’t carry the pain you carry, and I’m sorry that happened to you,’” Dr. Britt remembered. “But you have to make a choice, you can let these people weigh you down with that pain and that hurt or you can make a decision to free yourself from that pain, and you will rise.”

Just as her coach didn’t write her off as someone “at-risk,” and instead saw her potential, the Great Expectations program offers a chance for students who have aged out of foster care to reach their goals and accomplish things that they may not have thought possible.

“This program does not label you ‘at-risk,’” Dr. Britt told the crowd. “The expectations for you are great because you are capable of achieving greatness.”

Started in 2008, the GE program pairs foster youth with an adult coach, who works to assess the student’s skills and interests, and helps guide the student into higher education. Coaches also help with practical matters, such 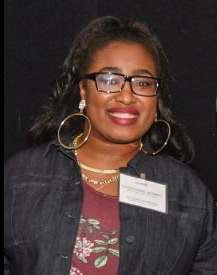 as filling out applications, covering expenses, and arranging transportation between school, home, and work.

Domonique Mabry, a GE participant who just completed her Mechatronics Technology certificate at ThomasNelson Community College said that having a support system that believed in her potential was empowering after getting sympathy for most of her life.

“Great Expectations has been the turning point for me, as far as being able to succeed,” she said. “There were a lot of times that I felt like I was being left behind, and I had to just plod along… it’s always uplifting when somebody comes back to say ‘you’re worth it, and you’re gonna do this.’”