Thomas Nelson’s strength is in the diversity of its student body, creating a learning environment that is far from traditional. That non-traditional experience continued when the final weeks of classes for the spring 2020 semester were moved online.

It seems only fitting that the graduation ceremony will not be traditional. A virtual commencement will take place May 14 at 10 a.m. online at tncc.edu. Highlighting the event will be presentations from three graduating students, including the President’s Award winner, who is in his 30s and whose journey at Thomas Nelson began in 2014.

“Honestly, if I had been told that going in I would have the opportunity to apply, much less receive the award, I would have said somebody was crazy for saying that,” said Justin Wolf, who lives in Newport News. 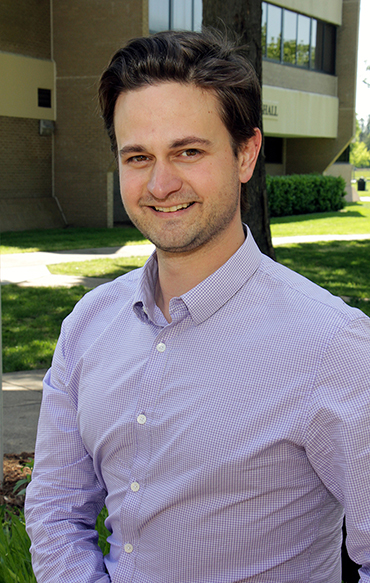 “Having the GPA and the ability to actually qualify even for the award means a lot,” said Wolf, who while at Thomas Nelson served as speaker of the Student Senate, vice president of Phi Theta Kappa honor society at the Historic Triangle campus, honor society president at both campuses and president of the Fitness Club.

Wolf’s education at Thomas Nelson began in 2014 when his younger brother was graduating from high school.

“I decided it would be good to go and accompany him and help him through the processes there,” said Wolf, who was working in construction at the time but realized he wanted something else.

Wolf took a break in the 2017-18 and 2018-19 academic years, but returned in fall 2019. He is graduating with an associate degree in social science and is particularly proud of the achievement given that he has dyslexia. He plans to pursue a bachelor’s degree in architecture at North Carolina State University. His brother, Bradford, graduated from Thomas Nelson in the fall and now is at Christopher Newport University.

“He took a longer road in some respects because he didn’t take any time off,” Justin said. “But at the same time, he beat me to it at the end.”

The Vice President’s Award recipient is Angelina Johnstin, a 21-year-old from Lafayette High School. She was just as surprised as Wolf to win the award.

“It’s such a great honor,” she said. “I didn’t expect to receive it. I was very shocked and delighted.”

Her associate degree is in Business Administration. She starts work on her bachelor’s in the same field at CNU in the fall. She hopes to follow that with a master’s degree.

While her route was more traditional, her final semester (along with everyone else’s) was not because the coronavirus forced all classes online.

“My professors really helped me to get through it. I had to take six courses this semester, but it all went really well,” she said.

As a shy person in high school, Johnstin wasn’t sure how or where she would fit in at college. But thanks to her professors at Thomas Nelson, she felt welcomed from her first day on campus.

“I would like to state that the professors provided me with an extraordinary support and mentorship to be able to excel and be successful in their classes,” said Johnstin, who participated in the Ambassador Program and the 10-10-10 Program at the College.

“This award it means so much to mean. I really can’t express how much it means,” she added. “It’s a validation for me that all the hard work and dedication I have done, that I’m actually succeeding in college and in life. It’s an honor and a way of showing that everything I’ve done is paying off.”

Williams, 20, graduated from Denbigh High School and is receiving a certificate in Pre-Dental Hygiene. She is reciting a poem she wrote that was inspired by her time at Thomas Nelson.

"One day during my fourth semester, I found myself in front of this large window in Templin Hall. The sky was blue, the sun was shining, and I could see the entire campus," she said. "Initially, I had my reservations about attending TNCC, but in that moment, I knew it was where I belonged. When I saw the beauty of the campus, I was reminded of all the things I loved about TNCC - the sense of community, the helpful passers-by, and the wonderful faculty and staff."

She thought sharing it at graduation would be the perfect time.

"It feels like a dream come true to share it with the same people who inspired me to write it," she said.

The online commencement ceremony adds a twist to the keynote address. Instead of one speaker, there will be six each offering a pre-recorded video message of up to eight minutes. The videos will be accessible on the College's graduation ceremony page allowing the audience to select a specific speaker and view the videos numerous times.

Tony Brothers: Founder of Men for Hope, Inc., and a longtime referee in the National Basketball Association from Norfolk.

Bron Hansboro: An award-winning floral and event designer based in Richmond. He travels the world plying his trade and teaching online courses. He’s also a former high school principal.

Fawn Miller: She’s a “chill-preneur” living on a beach, doing everything by cell phone and computer. She lives in Mexico.

Rosetta Qadhi: An author and successful businesswoman with companies in Canada and the Caribbean.

Jennifer Trethewey: An author and successful businesswoman from Australia.

As for the ceremony, the pre-recorded videos will be posted online at 10 a.m. Thomas Nelson's concert choir is performing the national anthem, followed by an invocation by Pastor Ivory Morgan-Burton, and a welcome message from Interim President Gregory DeCinque. The deans of each division will read the names of their respective graduating students, as well as any honors those students receive. After the conferring of the degrees, there will be video of faculty applauding the students.

Instead of a big graduation party or get-together, the College is having a virtual celebration 7-9 p.m. on Friday, May 15. It will consist of a Zoom video with students registering online. They can invite family and friends.

It will be interactive, led by “DJ Hot Rod” of Hampton. Students are encouraged to submit requests for music and to share pictures of themselves, in their regalia, celebrating.